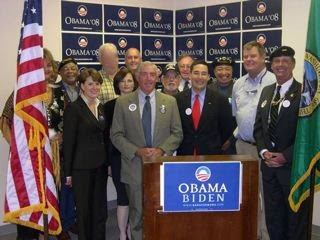 Couple of weeks ago, the Washington State Veterans for Obama officially opened its office in Seattle. Since I'm a member, I figured I'd go. The media were supposed to be there (they weren't); maybe I could get a little face time. (I'm in the above picture, absent face. Others include a two-star general, a state senator, people from veterans' outreach programs, generic vets, coupla flags, etc.)

I have no problem identifying as a liberal. As a Democrat, though, it's sometimes cringe-inducing.

The event was pleasant enough: mercifully short, less than an hour late, several satisfyingly brief speeches, one or two of them actually moving, maybe forty people (most of whom dutifully wandered over from other Democratic offices in the building, a decidedly run-down one, furnished like a dorm-room only cheaper) looking on. But for some reason it began with a Native American prayer. Burning some plants before the beginning (when I arrived I thought it was cigarettes, asked if I was at the "Smokers for Obama" convention. Not met with humor), waving some feathers in the direction of the four winds, turning and chanting in an unspecified native language, earnest, serious.

Don't misunderstand. I have no problem with Native Americans. Many of my patients were Native American. I operated on a couple of Chiefs, had in my hands the gallbladders of many tribal members (much higher incidence of gallstones in Native Americans than non-natives.) But why was that a part of the opening? Why not Hebrew prayers, or a little Hare Krishna? Or better still, why not none of the above? There's some sort of pseudo-sensitivity going on, an underlying assumption of something with which I don't agree. Not dissimilar to the menu police at the Denver convention: it's a sort of in-your-face (face theme, here) assertion that the values of some surely must be the values of all. Which is sort of strange, for the party of open-minded diversity.

Neither issue, nutrition or native, is anywhere close to turning me away. Silly, more than anything. And embarrassing. I squirmed when being subjected to feathers and fumes just as I squirmed during prayers in school. And where, pray tell, is the sense of proportion? Or, Coyote-Raven-Turtle forbid, the humor?