Look Up "Irony" In The Dictionary 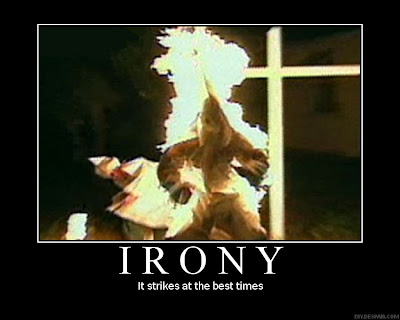 Here's an interesting thought. Abandoning honor, rejecting his rejection of sleaze, John McCain chose, in desperation, to give his campaign over to the very people who trashed him in 2000. Some say he hired them reluctantly, that the "real" McCain mourned. Given the gusto with which he took to it, I doubt it. But that's not the point.

The point is that the low road (like that bridge) appears to lead to nowhere.* Oh, sure, it's got the rabble riled up. (And, not to take it lightly, it's not only obscene but downright dangerous.) But there are beginning to be signs of backlash.

John McCain sold his soul, reached out to the Rovian relics of 2000, and they trashed him again!! Back then, they stabbed him in the back. This time, he took it frontally; opened his chest and let them in. It's a self-inflicted wound, and I don't feel sorry for him. The only question is, does his feeble attempt at reining it in indicate true remorse, or just one more lurch in the direction -- any direction -- he thinks will lead him to the ring?

[* I write this during a moment of optimism; and yet I know it's far too soon to think he's overplayed his hand. We have a long tradition of negative politics, and I can't recall a time it backfired. Now that they're going after Michelle Obama, it seems everything is still on the table, and anything can happen. Hate still is an abundant fuel.]