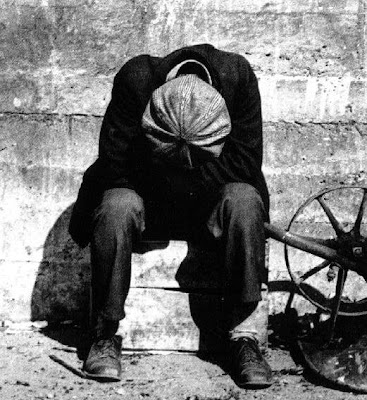 I barely have the words to express the sadness and literal sickness I feel at the sight of Sarah Palin campaigning around the country, deliberately pitting one against another, framing this election as about those who love this country vs those that hate it. The McPalin campaign is fully committed to such diviseness. They're funding robocalls by the very company that slimed McCain in 2000, denounced by him then, now hired by him to do the same thing to Obama. At the precipice, while one campaign calls for finding common ground, for an end to that sort of divisiveness, the other is doing the opposite. And the polls are tightening. It still works.

Do they really not see how damaging it is? Do they believe that serving on a charitable foundation with William Ayers portends more danger to our country than the seeds they are sewing? Does winning justify tearing us asunder? It's simply unfathomable. And yet, it still works.

Their people feel comfortable in their hatreds. These self-described America-loving, Jesus-following patriots need to hate. They find difficult problems too difficult. Really to follow their Savior's teachings is too complicated: how much more comfortable simply to hate than to make the effort required to find a way forward with people with whom you disagree on some things. The more challenging and threatening the times, the more they recede into simple-mindedness. To do otherwise is too scary. A closed mind keeps out the cold.

Therein lies the real secret of the Republican party. The smart people within it (and yes, I believe there are a few of them) know that in order to get their "base" (how appropriate a term) voters willingly to vote for policies that are clearly against their own interests, they need to tap the correlation between conservative thinking and religious and social fundamentalism. It's no coincidence that the most fundamentalist religionists are nearly exclusively in the right wing. People who need to see the world in black and white, who deal with existential questions by blanking them out with absolutist thinking, are not, by definition, contemplative. And so we have it: whipping up enthusiasm by pitting us against them; framing politics as an internal struggle, those who love the country against those that don't.

And the obvious -- that criticism and arguing we can do better is not unAmerican any more than correcting your children is child abuse -- escapes them. The paradox of their argument -- that exercising the very tenets of our country's founding: freedom of speech, speaking out against injustice means you don't love the country -- is unnoticed.

In the press conference that will never happen (why?), Sarah Palin should be asked: what are the areas of this country that hate America? In what way is that hatred expressed? What, exactly, are the "small town values" that she praises? In what larger cities do they not exist and what is the evidence? And this: do you think there's danger in pitting one half of the country against the other? Why not run a campaign on ideas, why not plant the seeds of reconciliation? And when she gets through those, how about comparing sitting on a board with William Ayers with sleeping with a guy who was a member of a party that literally hates America, to whose membership she herself has said "keep up the good work."

Who is doing more harm to America? Sarah Palin and her elderly enabler, pitching fear and hate, or Barack Obama and Joe Biden, who are speaking of hope and common ground? It's another of those things that seem as obvious as the sunrise. And yet, here we are again. It still works. It makes me fear for our future. And it makes me sick.