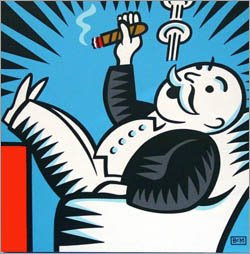 No longer able to be amazed at political stupidity, I comment once again on the latest inanity: "wealth redistribution." For the Republican party and Joah McPalin, it's the distortion du jour.

To state the obvious: the only government that's not in the business of redistributing wealth is one that collects zero money; ie, no government that's ever existed. You pay taxes, the government gets the money and sends it somewhere, in a transaction that is known as, oh, redistribution. Any change in any tax leads to re of the distribution. Last wealth redistributer: George Bush, when he took money from the peons and gave it to rich folks. Next in line: anyone who makes any change in that plutoid formula.

Whoever it was who said you'd never go broke underestimating the intelligence of the American people must be all achuckle. Newspapers, talking heads, even commenters here on at least one occasion, are spitting it out like it's poison, certain that it's also a winner for McPalin. Socialism it is!!! Taking money from taxpayers in differing patterns based on income!! If Barack Obama weren't spending all his time palling around with terrorists, he'd be plotting it right now. And he's a liberal terrorist, so he'd probably call it, say, maybe, oh, a PROGRESSIVE income tax. It could happen here, folks. It could happen here.

A recent study found that Republicans are "happier" than Democrats. Well, duh. When your response to reality is to deny it, when facts are minor impediments on the road to ignorance, of course you're happy. (The study also said they're richer.) I'm gonna call it the happiness response: it's like the flight option of "fight or flight." Hardwired, at least in the credulous.

This idea that any change in Bush's incredibly unbalanced and ineffective tax structure is, by definition, socialism, is like saying improving your kids' education is brainwashing. Returning to some of the tax policies of Bill Clinton??? Why that'd be like, like, going back to times of, what did they call it back then, what was that concept, fading from memory?

I believe John McCain is smart, at least enough to know what bullshit this is. And there's no doubt he thinks so little of his "base" that he assumes they'll eat it. Unsurprisingly, lots of them are. From every angle, his campaign assumes the worst in us, treats us like we're stupid. If it works again, as it has in the past, our descent is unstoppable.