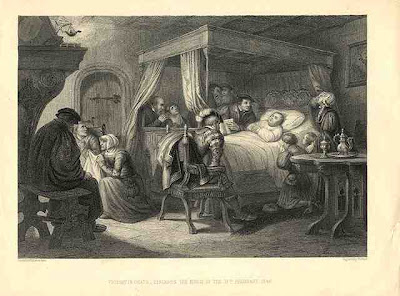 Many years ago, a patient on whom I'd previously operated for breast cancer came to see me, with her adult daughter. She'd recently been diagnosed with pancreatic cancer, and she'd decided not to have any sort of treatment. None of her current doctors, she said, were ones with whom she felt comfortable sharing her concerns, her desire. At some level, I was touched that she trusted me with her request: making personal connections, establishing trust with my patients was something I valued. What she asked was that I provide her, over time, with enough narcotics and sedatives that, should she choose to do so, she'd be able to take her own life.

In my state, Washington, there's a ballot measure allowing physicians, under very specific conditions, to provide lethal doses of medicines to certain small subgroups of terminally ill patients. Based on a law in place in Oregon for ten years, studies of which have not revealed abuse (and, in fact, a rather low incidence of use), the proposition has, of course, provoked strong opposition. Officially, the state medical association opposes it, and claims its membership overwhelmingly share that view. The fact is that a little over half of the members, myself included, favor it. I realize it's a very difficult issue. And yet, in virtually every hospital in the country, it happens all the time, in ways not very different from what the bill proposes.

I've written about this, if tangentially, on my other blog, too. There are no easy or universal answers. And that's the point. At the time of approaching death, doctors are often at a loss: death, by definition, is a failure for those whose job it is to heal. And yet the job isn't over; we can't turn away. It's generally accepted that a person ought to have the right to refuse care for themselves. Withdrawal of "active" (for lack of a better word) care is a regular occurrence, both in the situation where an alert and cogent patient requests it, and where family does so, for a patient no longer able to decide for him- or herself. It's the former situation -- a mentally clear patient -- to which the "death with dignity" laws apply.

In hospitals, in addition to withdrawal of care, drugs are given for comfort -- narcotics -- wherein the main goal is relief of pain but with the understanding -- because it's part and parcel of the effect -- that the arrival of death will be accelerated. Sometimes there's a sort of dance around that fact, and most certainly there's a need to be certain everyone -- all care-givers and family -- understand and agree. It happens, and to some extent it's extra-legal. It's not euthanasia, it's comfort care. But it's no secret what's happening.

"Death with Dignity" laws take that concept and make it above board, and out of the hospital. I understand how some recoil from it; the law allows not only for doctors to refuse to participate, but also that hospitals have a right to prevent their staff from doing it as well. As it should. But in my view, people have a right, in one of the most difficult, personal, momentous and fraught times of their lives, to make decisions for themselves. To make their own decisions about their own suffering. Not all doctors, of course, would feel right about being drawn in to providing the means. Nor would they have to.

As I read the bill (linked above), I was struck by the stringency of it, and by the complexity of the requirements upon the doctors involved. In fact, it could be -- not to put too fine a point on it -- a pain in the ass. And yet, the airwaves are filled with disinformation and dire warnings: it can be carried out even if the person is depressed (it can't: when depression is suspected, mental health referrals must be made), it can be foisted upon the most vulnerable (I don't see how it can), the sufferer need not notify anyone of his/her decision (that's true: but the law requires that the caregivers encourage it, and document same.)

The subject is difficult and painful. I could write volumes on it; in a way, not to do so is to treat it too simply (if needed, I can enlarge upon my thoughts in comments.) I fully sympathize with those who oppose it; but I don't sympathize with the idea of preventing others, who disagree, from having the option. Realizing it sounds a little flip: if you don't believe in "death with dignity," don't avail yourself of it; nothing forces it on anyone. And don't judge the suffering of others, and how they choose to deal with it.

[For a thoughtful panel discussion of the Oregon experience, read this. It's worth it if for no other reason than to remember, in this political season, that difficult issues can be discussed respectfully by people who disagree with one another.]

Email ThisBlogThis!Share to TwitterShare to FacebookShare to Pinterest
Labels: death with dignity, Proposition 1000