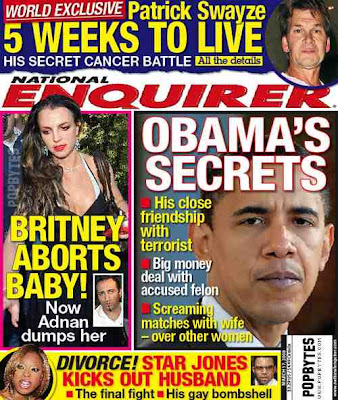 Sounds like John McCain is going to bring up the terrorism thing in tomorrow's debate. That's good news (and it would prove me wrong). Let's see, once the facts are on the table, how many people are moved to vote for the old guy. My guess: only those already there; way there. I suppose there's a chance Barack Obama could muff it, sound defensive. But I doubt it. Facts, as they say, have a well-known liberal bias.

Meanwhile, it's interesting to hear the rationalizations. McPOW seems unable to grasp that there's a difference between the candidates themselves whipping up the rabble by implying Obama consorts with and is himself a terrorist, and the occasional Obama supporter saying something stupid.

And we still have another three weeks of this crap.