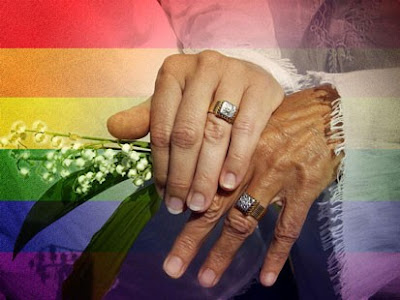 I'm re-posting here something I originally wrote on my other blog. Having lived in California for several years, having friends and neighbors who were gay, I find the ballot measure there to ban gay marriage particularly upsetting. In short, there's simply no reason for such a measure other than hatred, fear, or, at best, misguided belief.


During training, in San Francisco, our landlords were Dan and Del, a couple who'd been together for several years, and who remained together for another twenty-five or more, until Del died. Loving, thoughtful, and kind, they were the best landlords ever; eventually we bought the house we'd been renting from them, and they gave us a great deal. Terrific guys. We visited them whenever we returned to SF. I talked to Dan recently, not long after Del had died, in his seventies I think.

Here are a few things that I consider inarguable.

First: By logic, and by mounting scientific evidence, sexual preference is largely determined by genetics or other biologic factors. (Logic = in a society that discriminates and harasses and to a large extent reviles, who'd choose to be gay?) I recognize there's a spectrum, and that people at all points on the spectrum are capable of experimentation. But for most -- and especially those committed enough to want to marry -- it seems beyond obvious that homosexuality is not a matter of choice. Corollary: You can't catch gay. Additional corollary: if you think your god considers gays sinners, it seems he's the one making them, which says more about your god than about gays.

Second: For all of recorded history, in every culture, in every religion, in every country, there have been homosexuals. It's part of life. (And considering their contributions, a very positive part of it.)

Third: There is no argument against gay rights other than religious. In order to oppose gay rights, you have to believe one thing that's demonstrably wrong, and another that's unprovable; that is, you have to believe both that homosexuality is a choice, and that it is an abomination in the eyes of your particular version of the Person- or Persons-in-the-Sky. But on this planet there are lots of views of the sky-people and what they do and don't want. One is entitled to one's, but not to foist it on others. "Defense of Marriage" is a bogus argument of the bumper sticker variety: I've seen no discussion, nor any attempt to have one, other than simple declaration, that explains why my heterosexual marriage of thirty-seven years is in any way threatened or diminished in value if gays are allowed to marry. None. What evidence there is on the subject is to the contrary: in Massachusetts there has been no decline in heterosexual marriage since gay marriage was approved. The same is true in countries that allow it. (The opposite, in fact, seems to be the case.) Which is, of course, exactly as expected: there simply is no line that can be drawn between allowing gays to marry and the decline of heterosexual marriage. Nor need it be said: heterosexual marriage has been on the decline for decades; gay marriage appears only recently.

Fourth: Lots of good-hearted people feel uncomfortable about and around homosexuals. Many religions, in fact, seem in very large measure predicated on dealing with sexual discomfort of all sorts. Hide women, cover them up. Separate them from men. Marry a bunch at once and keep them all silent. Sexual pleasure is sinful. Especially the personal kind. Religious mores, as they apply to sexuality, seem based on repression, which in turn is based on fear of one's own sexuality, displaced on others.

I don't like anything about brussels sprouts. I don't even like looking at them. Yet it doesn't threaten me that others do; nor do I feel the need for a law to keep others from eating them. From a secular point of view, there is no reason to oppose gay marriage. It has no impact on society, one way or the other. Objections are based on religion, or on personal discomfort, neither of which are the business of civil law. Unless it can be shown that gay marriage is in some way a threat to our country (it can't), there is no justification for passing laws to prevent it. (It's fair to ask if there's harm to kids living in a gay household. But the evidence is to the contrary. Which is also intuitive: growing up in a love-filled home ought to be good for any kid. How many kids are in homes where they're not wanted?) And since sexual preference is biologic, it would be expected to have no impact on that of the child. Questions? Sure. Grow up more tolerant? The horror! Moreover, the logical extension of preventing it would be to forbid lesbian women from having babies. I'd think even religious conservatives would recoil from the state mandating who can bear children. Right? Right?...)

Among the oft-heard and stupid phrases one hears in the public square, at or near the top of the list is "the homosexual agenda." (Although, recently, "terrorist fist jab" has a special sort of transcendent lunacy that's hard to top.) It's freighted with hatred and fear, and implicit misunderstanding. Those who use the phrase, it seems to me, must be a little uncertain about their own sexuality: afraid they might be susceptible. After all, those who doth protest too much... That there is an "agenda" at all is pretty laughable, other than the desire to have the same civil rights as everyone else. Or is there something more sinister? Laws outlawing bad fashion? Outing closet thespians? Seems to me wanting an end to harassment and the right to marry hardly qualifies as an agenda. Unless breathing does, too.

Two adults love each other. They want to marry. Where's the harm? If a church doesn't approve of gay marriage, it shouldn't perform them. If you don't like gay marriage, don't do it.

Stick that on your bumper!