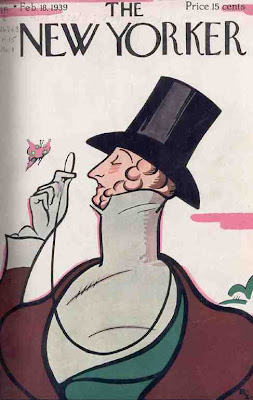 Yeah, well, I'm an elitist liberal. I went to an expensive college, I sip chardonnay. (Down it like lemonade, these days.) So, sure, I subscribe to, and read, The New Yorker magazine. (Sarah Palin has said, with regard to newspapers and magazines that she reads "all of 'em," so we have that much, evidently, in common.)

The most recent edition has a presidential endorsement. Unsurprisingly, it chooses Barack Obama. But what's news is that it's the most thorough, thoughtful, detailed and cogent exposition of the issues and contrasts that I've read. (It's also quite long, for such an editorial, which means it can't easily be summarized; and, of course, that few people other than subscribers, will read it.)

For those who'd like to see an extremely well-written and profoundly thoughtful discourse on the reasons to choose Barack Obama over John McCain, it can be found here. In far better language than I've been able to muster, it says exactly what I've been thinking and trying to say for months and months.