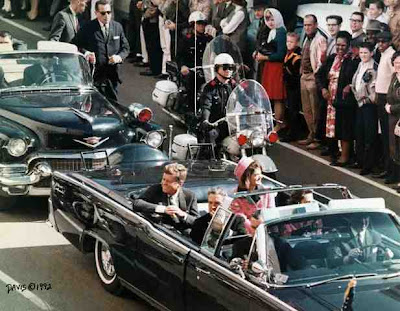 [This picture makes me physically ill: two weeks earlier he spoke at my college, and I was there. And yet, it's relevant.]


Scum like those dirtbags plotting to kill Barack Obama and dozens of black students existed before Obama's campaign, and will exist after; McPalin didn't create them. But they're chumming the waters; intentionally or not (I suppose it depends on how narrowly one defines "intention") they're providing the substrate for the bottom-feeders. And not all of them are as incompetent as these guys.

Everyone knows such people are out there. I'm sure I'm not alone in worrying about the possibility of assassination. So it's hard to hear the incendiary remarks coming from campaign podiums -- associating Obama with terrorism, calling him a communist, implying (if not saying outright) that he hates America, he'll take your belongings -- without feeling sick. How much incentive do those whack jobs (to use a recently reprised phrase) need to act? And the campaign literature, some of it directly from and the rest of it implicitly condoned by McCain and his party, is even worse.

I've not been more certain of anything than I am of this: if Barack Obama is elected he will govern from the center (okay, the left side of it, but not all the way), and his message of commonality will remain central. No matter how successful he is, the worst of us will remain close-minded and refuse to listen. Will enough of the people in the above-linked video, and the many others like them, allow themselves to wait, and to observe, and give him a chance? Will they judge him on what he does and doesn't, giving our country a chance, too; or will the stirred-up venom of the campaign, the call to our worst, reverberate down and down and take him -- and us all - with it? It really is in our hands, not Obama's.

If we let them, these young people might have a chance to grow up and save us all: